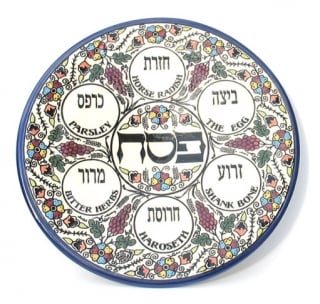 There are tens of different Jewish communities around the world and as with every festival; each community has its own special Pesach foods. Pesach, the seven-day spring festival that is also known as Passover, is the Jewish festival that celebrates the redemption of the Jewish people from Ancient Egypt. Each Jewish community finds its own ways to commemorate and celebrate and we’re going to bring a variety of the foods from different communities that are consumed on this festival…

Haroset is a paste-like mixture that is eaten in commemoration of the mortar used by the Israelites when enslaved in Egypt. The Haroset is one of the symbolic foods eaten on the first night of Pesach at the Seder meal. Jewish communities around the world prepare it differently.

The Haroset prepared by Persian Jews is actually known as Hallaq and it symbolizes the forty years that the Israelites spent wandering in the desert before they reached the Holy Land. In commemoration of those forty years, many try to incorporate forty ingredients into the Hallaq.

Matzah Balls are a traditional Passover food for Jewish people of Ashkenazi origin. Matzah Balls are traditionally served in chicken soup at the beginning of the meal and are basically delicious dumplings made with Matzah meal, eggs, water, oil and spices.

The Jewish community of Turin, Italy traditionally makes Minestra Dayenu sop for Passover. Dayenu is Hebrew and means “it would have been enough,” and forms the chorus of a popular Passover song sung at the Seder table. The soup is made from chicken stock, Matzah, egg yolks and cinnamon.

Tunisian Jews prepare M’soki for Pesach– a stew based on vegetables and lamb. The colorful vegetables in the stew emphasize the season that Passover falls in- spring, whereas the lamb is in commemoration of the lamb that the Israelites sacrificed and ate before leaving Egypt, at G-d’s command.

Anjinaras is a Turkish Jewish recipe that features artichokes- a spring vegetable that is closely identified with the festival of Passover.

Carciofi All Giudia is Italian for “Jewish Style Artichokes” and is another dish that pays homage to the vegetable associated with Passover- artichoke. Artichokes are a spring vegetable and one of the names of Passover is “the Spring Holiday.”

A Sephardi, layered pie that is enjoyed on Pesach is Mina de Pesach and it is made up of layered Matzah, chicken and mushrooms.

The Jewish community living in Cochin, India traces their roots back to a shipwreck that left seven Jews stranded on the coast of India two thousand years ago. Although they held fast to their Jewish tradition, their food has taken on a definite Indian twist. For Passover, the Bene Israel community (the name of the community who live in Cochin) would prepare a dish that incorporated lamb, in commemoration of the Passover sacrifice consumed the night that the Israelites left Egypt.

Megina is a Matzah pie that was enjoyed by Jewish communities in Turkey, Greece and Rhodes. The pie incorporates Matzah, beef, eggs and onions.

THE FOUR CUPS OF WINE

On the first night of the festival of Pesach the Seder ceremony is held. In a similar fashion to the festival of Purim which takes place exactly a month before, wine plays an important role in the proceedings. However, whereas in the case of Purim wine is used to numb the senses, on Pesach it is used to heighten our awareness of the miraculous events that took place and to symbolize them.

The first cup of wine is used to recite Kiddush, that is, the sanctification of the festive day through the blessing and drinking of wine. In the Kiddush, the Jewish people thank G-d for making them holy as His chosen people and thereby enabling them to make the festive days holy.

This cup is drunk after the fulfillment of the part of the Seder ceremony called Maggid. In Maggid, the participants of the Seder fulfill the commandment to relate the story of the exodus from Egypt. Psalms of thanksgiving are recited, ending in a request for the final redemption. After the blessing over G-d redeeming Israel, the cup is drunk, leaning to one’s left side (it is an obligation to lean to the left while drinking the cups of wine on Seder night because this is an expression of freedom).

The third cup is drunk following the recitation of Grace after Meals. This cup represents our gratitude to G-d for providing for our every need.

The final cup is drunk after the concluding psalms of praise are recited. This section of the night focuses on the future, requesting redemption for the Jewish people and humanity at large. After the drinking of this cup the Seder is concluded.

An interesting interpretation of the reason for four cups is offered by the Sh’lah (Rabbi Yeshaya HaLevi Horovitz). He explains that the cups represent the four matriarchs, Sarah, Rebecca, Rachel, and Leah. The three patriarchs, Abraham, Isaac, and Jacob, and their roles in building the Jewish nation are mentioned in the Haggadah text which guides us through the Seder. The four matriarchs and their respective roles are hinted at through the four cups and their positions in the Seder. See the following link for a more extensive explanation: http://www.torah.org/learning/yomtov/pesach/5757/vol3no02.html#

The Kiddush Cup is a revered ceremonious object in Judaism and what better way is there to adorn one’s Seder than with a unique, intricate Kiddush cup. Click here to see an extensive selection of special Kiddush cups. It is the perfect way to welcome in the approaching festival and can be used afterward throughout the year on other festivals and Sabbath days.