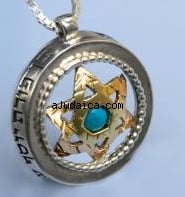 designs and ideas coming out all the time. There are the old-school symbols such as Menorah, Star of David and Mezuzah that will never lose their special touch due to the age-old messages that they represent. Additionally, there are new designs such as Hamsa, Kabbalah Jewelry and Jewelry that takes Biblical phrases that have been used throughout the centuries and reinterprets them in beautiful ways.

A  popular kind of Jewish Jewelry are the pieces that are connected to love- searched for by engaged couples at the beginning of their journey together, couples looking for wedding rings and couple who have been married for years and wish to express their deepening commitment and love.  All discover something magical in the pieces of Jewish Jewelry that take the theme of love and create truly special and deeply meaningful pieces that are rooted in age-old traditions. For those less-acquainted with this genre, we would like to introduce some pieces that will give you an idea of the gorgeous pieces on offer that are a shame to miss out on…

The Song of Songs is a book of eight chapters that is found in the third section of the Bible, Ketuvim, and it is the first of the five books that are known as Megillot (scrolls). On the surface, the book seems to tell a beautiful love story but according to Judaism, the book is an allegory of G-d’s love for the people of Israel. According to Rabbi Akiva, all of the book of Ketuvim is holy but the Song of Songs is the Holy of Holies. In some circles the book is read on the eve of Sabbath, to symbolize the love between G-d and His people on the special day that He set aside for them.

There are many pieces of Jewish Jewelry nowadays that incorporate select verses from the Song of Songs. The verses are poetic, beautiful and as well as being meaningful on a superficial level, are also meaningful on the deeper, mystical level; reflecting the relationship between G-d and His people. There is a concept in Judaism that the love between man and wife is in order to gain a smidgen of an understanding of the relationship between G-d and His people and this jewelry helps one keep this powerful concept in mind.

Another popular trend in the world of Jewish Jewelry is that of pieces that are inscribed with Kabbalistic words that cannot be made sense of in regular Modern Hebrew but to the knowledgeable sage of Kabbalah can be understood for their deeper meaning. Examples of such words include the combination of Shin-Alef-Heh. Shin-Alef-Heh is believed to possess the quality of helping one find new love and to strengthen already-existing relationships. Another example is the combination of Hey-Hey-Ayne which is believed to strengthen love and the relationship. Indeed, one wearing such jewelry cannot understand the power of these combinations to depth but can rest assured that they are part of an ancient tradition that has been passed down from generation to generation.

Lastly, another trend in Jewish Jewelry that symbolizes love is the incorporation of the seven blessings recited under the canopy at a Jewish wedding.  The blessings are recited after the ring is placed on the bride’s finger and the bride channels the abundance sent from above on this holy day via the seven spheres on earth. Each blessing celebrates a different aspect of this union between man and woman and the use of the blessings in Jewish pieces of Jewelry is a symbolic tribute to the sacredness of this coming together of two halves of a soul.