The Mezuzah throughout the Ages

The Mezuzah is the scroll of parchment affixed to the right-hand doorposts of Jewish homes. More often than not the parchment will be protected by an attractive case.

Meaning of the word Mezuzah 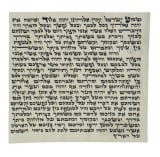 In the book of Exodus, the word Mezuzah occurs for the first time and is understood to mean “doorpost.” The origin of the word is unclear although there are claims that it originates from an Assyrian word, “manzazu.”

The Mezuzah in the Bible

Due to Rabbinical understanding of these passages, the Mezuzah came to be understood to be a piece of parchment made from the skin of a kosher animal upon which two Biblical passages appear- the passages that speak about the commandment to affix G-d’s words to one’s doorposts. The verses are written in square, Assyrian characters in 22 lines. The completed parchment is rolled up and place in a case and on the back of the parchment is written the Hebrew word Sha-dai which is a name of G-d as well as being an acronym of the Hebrew phrase “Shomer Daltot Yisrael,” which means, “Guardian of the doors of Israel.” The Mezuzah is placed in the case so that the word is visible through it.

Where and how is the Mezuzah affixed?

The completed Mezuzah is affixed to the right hand doorpost of rooms in the Jewish home, in the top third of the doorpost and according to most opinions will slant slightly inwards. When affixing the Mezuzah a special blessing is recited.

The Earliest Evidence of a Mezuzah

The earliest evidence that has been found for the fulfillment of the commandment of affixing a Mezuzah is from the Second Temple period. A Mezuzah parchment was found in a cave in Qumran and some sentences from Deuteronomy can be made out. However, sentences from the Shema, which also appear in Mezuzahs, could not be identified.

Samaritans and the Mezuzah

The Samaritans make Mezuzahs out of large stones and attach them to the lintel of the main entrance of the house. They carve the Ten Commandments on their Mezuzahs. Such Mezuzahs have been found in Israel that date back to the early Arab or Byzantine eras.

Karaites and the Mezuzah

The Karaites do not believe that the Mezuzah is obligatory due to their not holding by Rabbinical Judaism. They do still attach a form of Mezuzah that is made in the form of two tablets of the law. They don’t write on them and they will be fixed to the doorways of public buildings and sometimes their private buildings.

Kabbalistic Additions to the Mezuzah

In the Middle Ages it was a custom to add kabbalistic additions to the text of the Mezuzah. These additions were usually the names of angels. Maimonides was vigorously opposed to this custom and sharply stated that those who do so have no share in the World to Come. He disliked the fact that people were turning a commandment into an amulet. Maimonides’ decision prevailed and today the Mezuzah only contains the original biblical passages.

Where are Mezuzahs attached?

According to Orthodox Judaism Mezuzahs must be affixed to the doorpost of every room of a house that is lived in, thus excluding toilets, bathrooms, storerooms, etc. the Mezuzahs must be inspected twice in seven years to make sure that the writing is still readable.

Mezuzahs make a lovely gift. They are popular items as gifts for newly married couples and are generally cheaper than most Judaica and come in a variety of materials, colors and designs. Also ideal for housewarming parties, the Mezuzah connects Jewish people to the long chain of tradition and adds beauty and depth to the new house.

Check out our Mezuzah items at Ajudaica.com!