Quite often in Judaism, when one wants to research a subject the first place one looks is the Bible. This is due to the fact that the Bible is viewed as being G-d’s words and His words are considered as having eternal significance. What happened in the Bible, what was recorded was meant to be applicable for all generations. Therefore when faced with the seemingly unrelated question of Jewish Jewelry, it is natural that a Jewish person would want to take a look at how the Bible relates to the subject of jewelry. This piece is by no means going to be an exhaustive collection of sources from the Bible and from the Oral Torah; rather I will attempt to pick some instances of where jewelry came to the forefront in the Written and Oral Law and see how this should affect our attitude towards Jewelry in Judaism.

What first jumps to mind is the episode of the Golden Calf in the book of Exodus. Aaron told the Israelites to bring him their gold jewelry so that he could form a god for them. The commentator Rashi explains that he was actually trying to buy time hoping that the women and children would refuse to donate their jewelry, and this is exactly what happened.

For those thinking that these women were just interested in hanging on to their gold we learn later on that the Jewish women donated their jewelry with open hands for the building of the Tabernacle. The women’s opposition to donating gold for the Golden Calf showed their higher spiritual level than other members of the congregation who were prepared to part with their gold in order to form an idol.

In the Code of Jewish Law we learn that a man should pleasure his wife before the Three Foot Festivals by buying her clothing and jewelry according to his means. Good food is an expected part of festivals and the Sabbath day but not everyone knows this fact.

After a peek at these interesting sources, the question is what are the most popular symbols on Jewish Jewelry worn today? Jewish Jewelry is worn by Jewish people as a sign of their love for their religion and for the beautiful shapes that it comes in. many non-Jewish people will also happily purchase Jewish Jewelry either out of support for the Jewish people and the Land of Israel, out of curiosity for the unique symbols or sometimes even just because they don’t know it’s actually a Jewish symbol!

We’re going to make things easier for those unfamiliar with Jewish Jewelry and give you a quick low-down on common symbols on Jewish Jewelry so that you can buy a piece and truly enjoy it for its inner and outer beauty. 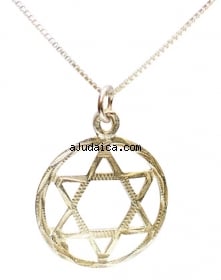 on Jewish Jewelry. A relatively modern symbol, the six-pointed star, made up of two triangles has become associated with the State of Israel on account of it featuring in the official flag of the country. Israel lovers and supporters wear the Star worldwide to show their appreciation and admiration of the State of Israel.

Chai is a Hebrew word made up of two Hebrew letters; Het and

Yud. Chai means life and the numerical value of the word is eighteen which leads to the wide-spread Jewish custom of giving charity in multiples of Chai- expressing the wish for a long life due to the giving of charity. The Chai symbol has become the symbol of the Jewish people who despite all odds have survived and persevered despite all the hardships along the way.

Ana B’Koach is the name of a Jewish prayer that contains 42 names of G-d and has deep, mystical meaning behind it.  Over the years it has become popular to produce Jewish Jewelry inscribed with this prayer and those who celebrate the Sabbath find their singing of this prayer with the congregation as they welcome in the Sabbath day is truly elevated by wearing this special prayer on their neck.

Hamsa is Arabic for five and refers to an inverted palm that has ambiguous origins and has made its way in to several religions around the world. The Hamsa is believed to protect against the evil eye and over the years has become a much-loved piece of jewelry.

History & Customs Related to the Mezuzah