Meaningful gifts for the Jewish holidays

There is a custom to give gifts on the Jewish holiday of Hanukkah. The festival celebrates the miraculous defeat of the enormous Greek army by a small band of courageous Jewish guerilla fighters. Furthermore, when the Jewish people came to re-dedicate their 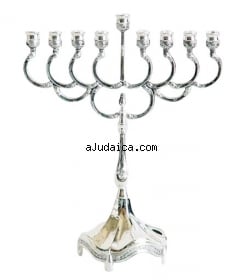 holy Temple that had been painfully desecrated by the Greeks, they found a single jug of oil that amazingly kept the seven-branched candelabra in the Temple alight for eight days until more oil could be produced. Year after year the question is asked whether the custom of giving gifts on Hanukkah is a Jewish custom or whether it is on account of non-Jewish influence of a particular festival that falls around the same time in the winter.

I think that in order to answer this question we need to tackle the question of the meaning of gifts in Judaism and the idea of giving and receiving according to the Jewish religion.

Giving and Receiving in Judaism

Let’s start with the issue of giving and receiving. It is well-known that some other religions such as Christianity frown upon receiving gifts, believing that it is better to give than to receive. When wanting to understand how Judaism relates to certain subjects, the first thing one does is take a look at the Jewish sources and there is no better source than the Torah (the Bible) itself.

In the book of Shmot (Exodus) one reads about the building of the Tabernacle in the desert; a place that was meant to serve as a dwelling-place for G-d’s Presence.  It is intriguing to read that G-d commanded the people to donate things using the expression, “let them take for Me a donation.” Surely, the less-awkwardly worded, “let them give a donation,” would have made more sense? The Midrash (Midrash Rabba Leviticus 34) explains that this curious wording is, in fact, there to teach an invaluable lesson about giving. The lesson learnt is that more than the receiver gains from the benefactor; the benefactor receives from the receiver. It is true to say that this point of view seems to agree with other opinions, that giving is more kindly-looked upon than receiving. This lesson is regarding helping those who have less, materialistically, than oneself.

But what about receiving? Is there room in Judaism for receiving gifts? At first glance this doesn’t seem to be the case. Indeed, the wisest of all kings, King Solomon, in his book of Proverbs, wrote, “He who hates gifts will live” (15:27).  Apart from the way that this comment can be understood to mean that a life of dependence on others is despicable, we seem to see that Judaism is not interested in developing the natural human desire of receiving gifts. People do not need to feel indebted to anyone but G-d and quite often gifts can cause a sense of needing to repay the generous benefactor.

Gift Giving and Receiving in the Jewish Year

According to the sources that we have seen up until now the picture looks fairly gloomy for gift receiving in Judaism. But then one remembers that on more than one occasion, gifts play quite a role in Jewish holidays. Apart from the custom of giving gifts to children on the festival of Hanukkah, there is also a law to give (primarily food) gifts on the festival of Purim. Furthermore, the Code of Jewish Law states that a man should buy his wife new clothing and jewelry before festivals.

What Makes a Jewish Gift Jewish?

Seemingly, there is room for gifts in the Jewish religion in specific situations. What is it the common denominator between all of the above examples? The gifts given are meaningful. Judaism does not view giving and receiving gifts as a way of life but rather as way to encourage children to learn more (Maimonides’ view on why we give children gifts on Hanukkah); increase a sense of brotherhood and baseless love (the reason given in the Scroll of Esther for giving gifts on the festival of Purim) and in order to treat a spouse and children even better than one treats oneself (the Jewish view on how a man must treat his wife and children).

Therefore, I think it can be said that Judaism views gift receiving and giving not as a way of life but as a way of creating more, happiness and love in this world. There is therefore an emphasis on giving gifts that are meaningful and purposeful- Judaica gifts related to every aspect of one’s life.