What on earth are those Jewish Jewelry Symbols?! 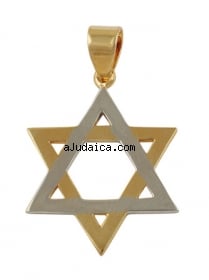 The Star of David is actually a relatively recent Jewish symbol. The Star of David is a six-pointed star made up of two triangles- one facing upwards and one downwards. A few centuries ago this symbol was not even associated with Jewish people and it has been known to be used by a few different religions. After it was chosen to be the central symbol on the Israeli national flag, it became associated with the modern State of Israel and Jewish people.

See our unique collection of star of david pendants! 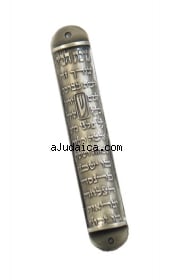 The Mezuzah is an ancient Jewish symbol that is rooted in the Bible. G-d commanded the Jewish people to affix certain words from the Torah to their doorways and through the understanding of the Sages, this was understood to mean that a certain passage was to be inscribed on a piece of parchment and affixed to every doorway of a Jewish house. The Mezuzah is seen when entering and exiting each doorway and serves as a constant reminder of G-d’s watchful eye over the inhabitants of the house. Many choose to wear such a pendant to remind themselves of G-d’s unwavering love and protection.

The High Priest in the times of the Temple had special garments that he would wear. One of these garments was the Choshen- a breastplate which was fixed with twelve precious stones that each represented one of the twelve tribes of Israel. When the High Priest needed to know certain things, through the use of the Choshen he would learn the answers. There are many beautiful Choshen pendants on the market that people choose to wear so as to remind themselves of the different groups that make up Judaism and how they must work together in harmony.

JEWELRY FROM ISRAEL VERSUS LOCAL JEWELRY

We live in a globalized world today whereby one can acquire objects from all over the world from the local stores. Jewelry, for example can be purchased in your local jewelry store and originate from all over the world. Jewelry from Israel is just one example of the kinds of jewelry one can purchase in the stores and online. The question is asked, why buy Jewelry from Israel if I can buy local jewelry and support local artists?

There are a number of reasons for buying Jewelry from Israel: