“Hamsa, Hamsa!” is often proclaimed by superstitious Israelis who wish to ward off bad luck…

What is Hamsa Jewelry? 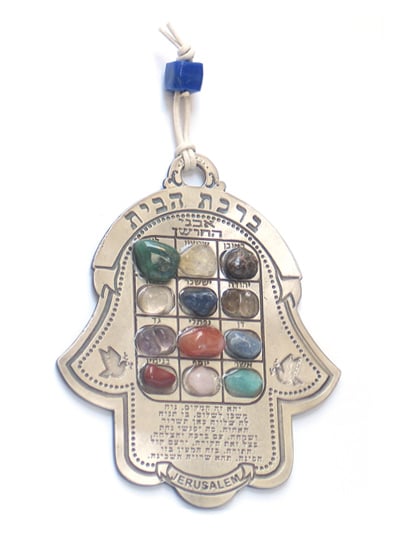 Hamsa Jewelry are pieces of Jewish and Israeli Jewelry that incorporate the Hamsa design. The Hamsa is a five-fingered, palm-shaped amulet that is usually hung or displayed with the fingers pointing downwards. Hamsa Jewelry has become a very popular type of Jewish Jewelry due to the fact that in recent years it has become increasingly popular in Israel.

What other names is the Hamsa known by?

The Hamsa is an interesting specimen that had unclear origins and with a number of religions claiming it as their own. This leads to a number of names for the same symbol- the Hamsa predates Judaism, Christianity and Islam yet all three religions call the Hamsa by a different name and claim ownership. In Islam, the Hamsa is also known by the name Hand of Fatima, commemorating Mohammed’s daughter, Christians call the Hamsa the Hand of Mary after the mother of Jesus and Jewish people have been known to call it the Hand of Miriam after the sister of the prophet Moses.

What are the origins of the Hamsa?

As stated above, the exact origins of the Hamsa are unknown but it is recognized as a universal sign of protection. In fact, the image of an open hand can be seen in Mesopotamian artifacts as well as in Buddha’s teachings. Some claim that the amulet originated in ancient Egypt whereas others argue that the Hamsa can be traced back to Phoenicia. Once Islam came along, the Hamsa became known as the Hand of Fatima and this was the name by which it was known to Europeans too.
Seemingly, the Hamsa made its way into Jewish culture via the Sephardic and Mizrahi communities who were influenced by their Islamic neighbors and their talisman. The Arabic Hamsa name was retained as well as the Hand of Miriam being added by the Jewish people.
Christian people also jumped on the bandwagon with their name, Hand of Mary, as they too viewed the symbol as a bearer of good fortune.

What does the Hamsa symbolize?

The Hamsa is a sign of protection and is also meant to bring blessings, power, strength to the wearer or to the house in which it is displayed (as well as Hamsa Jewelry there are many Hamsa Wall Hangings on the market). Most famously, the Hamsa is known to deflect the evil eye and is therefore a popular present to give to mothers of newborn babies so that they can hang it off the baby’s crib, stroller or bedroom wall. Additionally, many will wear Hamsa Jewelry on a daily basis on a necklace, bracelet or earrings, believing that it protects them.

Bows and Arrows on Lag B’Omer