In the book of Numbers, chapter sixteen, we read about the mutiny that was led by Korach against Moses’ authority. The story ends with Korach and his followers being swallowed by the earth as a divine punishment for their actions.

The Midrash provides some interesting background information. We know that Korach 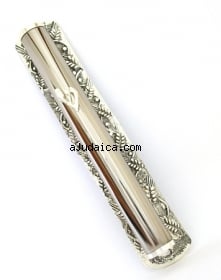 was quite a figure; of noble lineage, clever, wealthy and charismatic. One of the questions that Korach challenged Moses with was whether a house full of books still requires a Mezuzah. Moses answered that it did and Korach scoffed at this. After all, the Mezuzah contains two chapters of the Bible- the Shema prayer whereas a whole houseful of books contains the entire Torah- so Korach argued that it made no sense that such a house should need a Mezuzah.

Why was Moses correct? Why should the little piece of parchment contained in a Mezuzah have any significance compared to house full of books? According to the Lubavitcher Rebbe, the location is the key answer. The books are inside whereas the Mezuzah is outside. When a home contains Jewish texts this indicates that it is a Jewish home. However, what happens when one leaves the confines of one’s home? Does one cease to be Jewish? The answer, of course, is no. The Mezuzah represents the crossover between our inner and outer lives. When making the transition from private to public we need a reminder of who we are and that we take that identity with us wherever we may go. That little scroll contained in the Mezuzah reminds all those who pass it by that there is only One G-d and it makes o difference if we are in our private domain or in the big world outside.

Being Jewish “inside” for Jewish people living outside of Israel is relatively easy. It’s when Jewish people venture “outside” in the Diaspora that things become a little more difficult. The challenge of remaining proudly Jewish in the face of other cultures and despite curious looks and sometimes hostile attitudes is the real challenge.

Now we have a better understanding of why Moses rejected Korach’s argument- the Mezuzah does not replace the need for Jewish libraries but rather serves as a constant reminder of the need to take G-d and the Torah, traditions and values out into the big world.

Looking for Mezuzah? Check out our Mezuzah collection!