A Guide to the Tallit

The Tallit (known in some Jewish communities as Tallis) is a Jewish prayer shawl worn by
Jewish males. The Tallit is a white rectangular piece of fabric (usually made of wool but can also be made of cotton, polyester or silk). On each of the four corners of the Tallit are ritual fringes that are called Tzitzit in Hebrew.Many Tallitot have colored stripes woven in along the shorter ends. Traditionally these 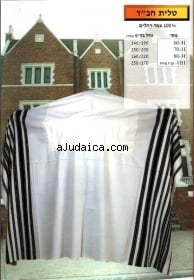 stripes were black or blue in memory of the blue strings that the Jewish people were commanded to include in the white ritual fringes but which ceased to happen after it became unclear from what animal the blue dye was attained. Nowadays, the stripes that are woven in come in an assortment of colors, perhaps on account of the great desire to be an individual in today’s world.

The top long end that goes around the person’s neck is called Atarah in Hebrew and is commonly decorated with embroidery or even a silver neckpiece. There is no religious significance to the Atarah, it simply makes it easier to identify the top of the Tallit.

The Tallit is worn by Jewish males starting from their coming-of-age at thirteen or from the day they get married- depending on their community. It is worn every weekday at the morning prayers.

The Tallit is worn in fulfillment of a Biblical commandment to wear fringes on the corners of one’s garment so as to remember G-d and His commandments. There was a time when males would wear cloaks or shawls with four corners on a daily basis and could therefore just attach fringes to the corners and fulfill this commandment but fashion has changed since then and nowadays such a garment is not commonly worn. Therefore, the Tallit was introduced and this way each morning the Jewish males could put the Tallit on and thereby fulfill the commandment to attach fringes to the corners of one’s garments.

The aforementioned Tallit is called a Tallit Gadol (Large Tallit) in Hebrew- there is also a Tallit Katan (Small Tallit) that is worn by observant boys and men from the age of three and upwards. The Tallit Gadol should be large enough to cover most of the person’s body whereas the Tallit Katan is more like a poncho worn under the clothing that measures at least 16 x 16 inches.

Find your favorite Tallit at Ajudaica.com

THE COLOR OF THE TALLIT

One who is looking for a Tallit can be overwhelmed by the fantastic selection of colors available today on the market. It should be noted that there are no specific rules regarding what color a Tallit must be. The color of the garment is not the important aspect- rather, the fringes that hang off the four corners and the measurements of the Tallit are the important details.

Traditionally, Tallitot have white backgrounds, as well as blue or black stripes. The blue stripes were meant to represent the special Techelet dye that was reportedly used in centuries gone by on ritual fringes. In the Bible, G-d commands the Jewish males to wear fringes on the corners of their garments so as to have a visual reminder of Him and His commandments at all times. Part of the commandment is to wear a blue fringe among the white fringes. Once upon a time, the source of this blue dye was known- today it’s source is the subject of debate. Therefore, it became traditional for people to have blue stripes on their Tallitot, representing the blue we are commanded to wear on our fringes.

In recent years there has been a tendency to wear all sorts of color schemes on Tallitot. There are those who prefer to stick with the traditional white background, seeing as white symbolizes purity. In the same line of thought, it is rare to find people wearing Tallitot with black backgrounds as black is seen to signify mourning, death, and grieving.

Today, the white Tallit with blue stripes has an additional meaning, due to these colors being the colors of the Israeli flag too. This is not happenstance- the Israeli flag was actually modeled off the Tallit.

There are those who will go for shades of gold and silver on their Tallit due to the luxurious effect that these colors evoke. Carrying out G-d’s commandments in the most beautiful way possible is highly regarded in Judaism and these colors seem to add a special effect to the commandment of wearing a Tallit.

The choosing of a Tallit today can be a highly personal experience, with each person choosing the color scheme that most suits him. There is nothing more enjoyable than being able to put on a Tallit every morning that truly does one good to look at and envelop himself in. Although the color of the Tallit is a side detail, it can definitely be used to create a truly personal prayer experience.

THE PRACTICE OF WEARING THE TALLIT DURING MORNING PRAYERS

It is the accepted practice that the Tallit, through which the commandment of wearing Tzitzit is fulfilled, is worn only during the morning prayers, also known as Shacharit. Why?

In the book of Genesis, in the section called Lech Lecha, a story is related to Abraham. Abraham (at the time of the story was called Abram, only later G-d added on the extension making his name Abraham) had rescued his nephew Lot and the king of Sedom from the hands of five other kings.

The king of Sedom turns to Abraham in gratitude and offers Abraham spoils of war. Abraham is then quoted as saying, “I have raised my hands to Hashem, G-d the highest, Maker of heaven and earth. If so much as a thread or a shoe strap; or if I shall take from anything that is yours so you shall not say, “It is I who made Abraham rich” (Genesis 14:22, 23).

Abraham had no problem in the previous verse accepting tithes from Avimelech the king of Shalem. Seemingly, there was something in the wickedness of the people of Sedom that Abraham realized that even the acceptance of a mere shoelace could ruin him. He did not want to be associated in any way whatsoever with the people of Sedom.

The Talmud (Sotah 17a) informs us that as a reward for Abraham’s refusal to accept even a thread of shoe strap his children merited two commandments; the blue thread, also known as Techelet, in the Tzitzit and the strap of Tefillin.

This is a classic example of the concept of “All of G-d’s traits are a measure for measure” which appears in the Talmud and Mishnah. Essentially, it means that G-d treats people in the same way they treat others.  Abraham had correctly refused to accept even a thread or shoelace from the Sedomite people and measure-for-measure G-d rewards him with two commandments that correspond to the thread and shoelace.

This, therefore, explains why the Tallit is only worn in morning prayers. The commandment to wear Tzitzit was given in Abraham’s merit and we, therefore, wear the Tallit specifically in “his” prayer of Shacharit.

Based on an essay by Rabbi Baruch S. Davidson.