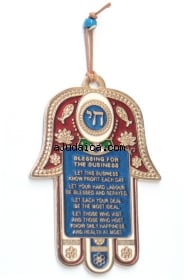 Chai pendants are popular choices as Jewish jewelry gifts. It’s worn by both men and women, and has been infused with a variety of meanings that make it a particularly meaningful piece to wear.

The Literal Meaning of Chai

The Many Meanings of Chai

The deeper question is why the word life should become such a popular pendant. Life has always been a central focus of the Jewish religion and culture. The toast “l’chaim” means “to life!” For all the many commandments in the Torah, Jews are reminded these are the laws “v’chai bahem,” that you will live through them.

Chai pendants symbolize this personal will to live and celebration of life central of Judaism. It’s also a reminder of how a person should live, in accordance with the laws and as ethical, moral beings. Even so, it’s also a reminder that the laws are in service of life and that life is to be protected even if sometimes at the expense of the law.

According to the Jewish tradition, it is better to commit a sin if not committing it would lead to death. This isn’t true for the sins of murder, sexual immorality, or idol worship. However, except for these three sins, the Chai symbol reminds Jews that the laws are there to enlighten and enrich life, not to end it.

The love of life symbolized by Chai pendants also alludes to the often repeated phrase in the Jewish tradition: “Am Yisrael Chai,” which translates to “The Nation Israel Lives.” In this way, the Chai pendant represents the value of the national life of Jews, both as a community that exists today as a culmination of the thousands of years of Jewish life that predate it, but also as the prayer and commitment that the Jewish nation will continue to live far into the future.

Why Wear a Chai Pendant

Many Jews, even if they aren’t familiar with finer points of the meaning behind the Chai pendant, wear it proudly as symbol of their faith and ethnic pride. Indeed, this motivation, while perhaps unknown to the wearer, is in full keeping with the Chai pendant’s meaning. Whereas an individual’s life is fleeting, wearing a Chai pendant is a way of connecting to the immortality of the life of the Jewish nation. By wearing a Chai necklace, the wearer announces his or her connection to the entire Jewish nation across all time.