The Five Books of Moses are divided into weekly portions and each Shabbat one portion is read, meaning that the Five Books of Moses get completed every year in the Synagogue. In the portion named Ki Tisa, the sin of the golden calf is relayed, followed by the breaking of the two tablets of stone, Moses’ prayer in which he requests to see G-d’s glory and G-d’s response that Moses will see His back but not His face. What does this mean? What is the back of G-d and why was Moses privileged to see it? Rashi, a commentator on the Bible, explains that Moses saw the knot of G-d’s Tefillin. 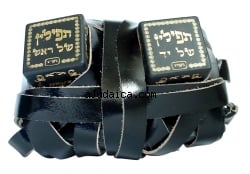 Shem MiShmuel, another commentator, explores this intriguing passage and notes that Tefillin refers to thinking- meaning G-d’s Tefillin is an allegory for His thoughts. According to Jewish Law, when a male wears Tefillin his thought must be completely pure, entirely focused on the message of the Tefillin. Moses was incredibly close to G-d and he therefore had a connection to Tefillin-a connection to G-d in thought.

The Tefillin that we have contain parchment that speak of love of G-d, His oneness, His Torah and the Exodus from Egypt. They illustrate G-d’s greatness and how it affects us directly. G-d’s Tefillin are a mirror image of our own- they focus on the uniqueness and holiness of the Jewish people and of G-d’s love and loyalty to us. The knot of the Tefillin that G-d showed Moses was the unbreakable bond between Himself and His people.

The knot of the Tefillin represents the Jewish people’s eternal relationship with G-d. No matter what situation they find themselves in G-d is with them- G-d is described as dwelling amongst the Jewish people, despite their impurity. In the same way a parent does not abandon his child, G-d does not abandon his people, no matter how far they have strayed from Him. Real love is the perfect balance between the traits of kindness and law. Sometimes G-d rebukes His people, punishing them in a way that a father must punish His son. Despite that, He is still their loving Father. This is the indestructible knot of G-d’s Tefillin. The Jewish people accepted the Bible with the words “We will do and we will hear,” we showed absolute commitment to G-d and in return we know that He will always be loyal to us.

Moses was the first one to understand this connection- when he descended with the tablets and the sight of the Jewish people sinning met his eyes he broke the tablets because he reasoned that if they were to die as a punishment he wanted to die with them. Due to this incredible loyalty and self-sacrifice for the Jewish people, G-d revealed to him the secret of the knot of the Tefillin.

Religion- All In The Head Or On The Head?