The word Torah literally means “teaching” and refers to the Five Books of Moses or the overall body of Jewish religious teachings that encompasses the whole body of Jewish law, practice and tradition. The Torah is the Jewish guide to life and through the learning of the Torah and through keeping its commandments Jewish people can draw closer to G-d and bring more G-dliness down into the world. 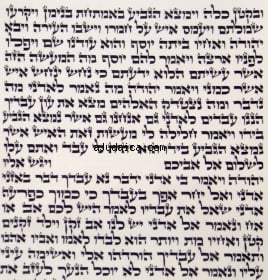 In Deuteronomy 31:19 Moses says, “…write for yourselves this song.” This can be understood as meaning that every Jewish person is obligated to write a Torah scroll. Writing a Torah scroll is an expensive, laborious process. All 304, 805 letters of the Torah must be written by hand, using a quill and ink on parchment, I written in special calligraphy and can only be done so by a specially trained scribe.

For those who are not trained scribes and can’t afford to commission one to write a Torah scroll on their behalf, another way of fulfilling this commandment is by purchasing a letter in a Torah scroll- by doing so you are having one letter written specifically for you.

The question can be asked what the most important letter in the Torah is- the first, last, those is the Ten Commandments? The truth is that if any, single letter is missing or incomplete the entire Torah scroll is invalid and cannot be used. This fact is reflective of the Jewish nation- together, we are one Torah scroll. Every single individual, big, small, scholar or unlearned represents a letter in the scroll and every single letter is equally important. We are one, interdependent, equally important being.

The previous Lubavitcher Rebbe rallied for Jews from all over the world to join together in the purchasing of letters in collective Torah scrolls. The Rebbe saw through such acts an expression of Jewish unity- one nation, one scroll, one G-d. Ever since the destruction of the Temples, this is the trait that is most lacking in our nation and is the very thing that is preventing the building of the third and final Temple.

In addition, purchasing a letter in a Torah scroll also places the owner of the letter in G-d’s book (the Torah) – as Daniel the prophet says, “Your people will be delivered, everyone who is found inscribed in the book…”
The Rebbe also encouraged the writing of special Torahs for Jewish children as they are pure and unblemished by sins which makes for a perfect unity.

Dip the apple in the honey…