History & Customs Related to the Mezuzah 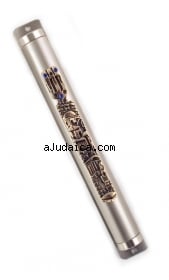 Mezuzah in the Scriptures and Today

When the word Mezuzot (plural of Mezuzah) appears in Scriptures it generally means doorposts. But in other places it is translated as doors (see Proverbs 8:34), windows (Kings 7:5), Temple Gates (Samuel 1 9) or jambs (Ezekiel 61:21). Colloquially, the word Mezuzah is used today to refer to the commandment or the parchment itself on which is written the prescribed texts. An interesting side-note is that Jewish people in India sometimes name their girls Mezuzah.

How Old is the Mezuzah?

According to tradition, Jewish people have been observing the commandment of Mezuzah since it was given at Mount Sinai in 1312 BCE. It is debatable whether they were used during the forty-year sojourn in the desert, seeing as the Israelites lived in temporary huts which according to Jewish law do not require Mezuzot. What can be assumed is that the Mezuzah became a permanent fixture in Jewish homes from the time when the Jewish people settled the land of Canaan in 1272-1258 BCE.

What is the earliest report of Mezuzah observance?

One of the earliest reports of Mezuzah observance is in the writings of Josephus in his “Antiquities of the Jews.” He reports that already in his time the Mezuzah was considered an ancient practice among the Jews.

Many ancient Mezuzahs that date back to the Second Temple Period have also been discovered in the Dead Sea region.

Were there ever lapses in the observance of the commandment of Mezuzah?

When the Romans ruled over Judea, the Jews were prohibited from observing the commandment of Mezuzah (along with other commandments such as Tefillin). In the Diaspora, the Jewish people clung on to the practice.

There were temporary lapses in the observance of the commandment of Mezuzah especially in Spain. There is evidence of Rabbi Moses of Coucy visiting Spain in 1235 in order to rebuke the people and as a result of which thousands upon thousands of people took upon themselves to observe the commandments of Tefillin, Mezuzot and Tzitzit.

Do details of observance vary among different Jewish communities?

There are slight variations among different Jewish communities in the observance of the commandment of Mezuzah. Some examples are as follows;

Tekhelet- To Wear or Not To Wear?

The Mezuzah throughout the Ages