All About the Ink, Pen, Lines and Script of Mezuzahs, Tefillin and Torah Scrolls

The main ingredients of the ink used by the scribe are; galls nuts/gallic acid derived from nuts; gum arabic; a resin substance and cooper vistrol (a bluish stone which gives the ink the blackness that is required). 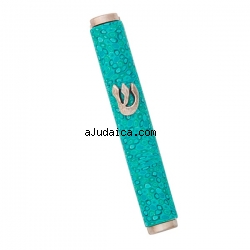 The gall nuts and resin are cooked in water for approximately an hour. The vitrol is then added and the mixture is boiled until only half remains.

Details of the rest of the process are a closely guarded secret. Each scribe has his own formula for making an ink with the desired qualities that he received through tradition that was passed to him by his teachers. The desired qualities of the ink are clarity, easy flow, intense color and tackless film on drying.

The pen used to write Mezuzahs and Tefillin is generally a quill from a Kosher bird (a goose or turkey). The quill is cut carefully so that the scribe can write thick and thin lines in one stroke by turning the pen and varying the pressure.

Before the Mezuzah is written, twenty-two lines are ruled onto the parchment, using a bone stylus. The letters written onto the parchment are suspended from the lines and not written on them. Apart from serving as a guide for the scribe, these lines are also a part of the scribal laws that have been handed down throughout the generations.

In the book of Exodus, it is written “U’ktavtam,” meaning, “and you shall write them,” in reference to writing these words on the doorposts of the one’s house. The Sages explained that this word can be read as two words, “ktav tam,” meaning, “perfect script.” The script used to write Mezuzot, Tefillin and Torah Scrolls has been specially defined by the Sages.

The exact form of each of the twenty-two letters in the Hebrew alphabet is clearly described in the Code of Jewish Law and each letter must be written according to these laws- a slight flaw can render the entire script non-kosher.

The letters can’t touch yet must also have at least a hairbreadth of space between them. The space between two words is the size of the Hebrew letter “Yud.” If two words are written together so closely that a child would mistake them for one, this too renders the scroll non-kosher. This is the case also if there is a large space in the middle of a word that makes it appear to be two words.

Need an idea for a Jewish Gift for the Home? Look no Further…