Tzitzit as the connection between heaven and earth

Jewish people firmly believe that part of their role of being in this world is to connect this world with the upper worlds; to elevate worldliness with heavenliness. When Jewish people perform one of the six-hundred-and-thirteen commandments that they received from G-d, they elevate certain things and/or times and reveal the spiritual potential in it. 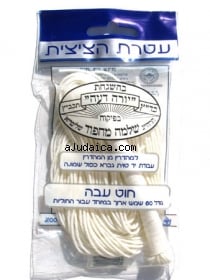 This somewhat abstract idea can, at times, seem very far removed from this materialistic, instant-satisfaction world that we live in. During the day, as we get on with our mundane activities, working in an environment that is not always conducive to spirituality, looking after the children at home in a tiring cycle that often leaves one just wanting to sleep, it can be hard to fathom how to successfully bring the Divine Presence down into one’s life.

This is the role of Tzitzit- the ritual fringes that Jewish males over the age of three are obligated to wear. Tzitzit are worn all day connected to a special garment called a Tallit Katan that is worn under the clothes as well as being worn by men in daily morning prayers attached to a different, larger garment called the Tallit Gadol. Tzitzit essentially connect this world with the upper world.

The sin of Adam And Eve in the Garden of Eden caused sparks of holiness to fall which resulted in the mixing of good and evil- things that before were all good suddenly became doubtful- before the sin Adam and Eve walked around naked and there was no shame in that- only after the sin did it become shameful- and this was only one example in the way the world changed forever after their sin.

Rabbi Zucker explains that our role in this world is to elevate these hidden sparks of goodness in the world and raise them back to their roots. Every single situation we are placed in at home, at work, out and about, is an opportunity to find these sparks, these captured pieces of Heaven and to rescue and elevate them by acting in a spiritual manner which subsequently transforms the place and test into a spiritual experience.

In every situation in life one must be aware that he is before G-d- this enables him to think and act from a spiritual perspective always. Any time, situation and vehicle can be transformed into a service of G-d.

Rabbi Zucker adds that when a person is on the verge of committing a sin, the Tzitzit give him strength to get up and recover the hidden spark in order to turn that potential sin into a positive act.

The Power of the Mezuzah