For those unacquainted with Judaism, something that may strike them if they were to spend time with religious Jews is the habit of kissing objects regarded as holy in the Jewish religion. Examples are kissing the two ends of the “atarah” on the Tallit (prayer shawl) before putting the Tallit on, kissing Tefillin (phylacteries) when they are removed from and returned to their bag, kissing the curtain if the ark before opening and closing it and kissing the Torah scroll’s mantle as it passes through the Synagogue. 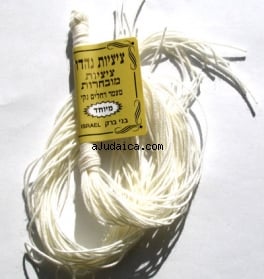 As a matter of fact, kissing these holy objects is not an obligation in Judaism, but a widespread practice that exhibits veneration of the objects. In turn, this represents one’s devotion to Judaism and loyalty to G-d.

We would like to explore a little the practice of kissing the Tallit/prayer shawl in this piece.

In ancient times, it is related that the ritual fringes that are called Tzitzit in Hebrew were worn on everyday clothing as a means of identification; one who wore Tzitzit was displaying their freedom. Tzitzit in those times were often kissed in business deals and was signified the sealing of a contract.

Nowadays, it is no longer common to wear the four-cornered garments that were common in ancient times and it is therefore necessary to wear a specially-designated prayer shawl/Tallit that has the prescribed ritual fringes/Tzitzit attached to each of the four corners. The Tallit is mantle-like, rectangular garment and is worn during morning prayers.

Before putting the Tallit on a special blessing is uttered, after which the Tzitzit are kissed and the Tallit is placed over or covering one’s head before arranging it on one’s shoulders.

The timeless blessing of Shema, regarded the central prayer in Judaism, is recited in morning and evening prayers as well as just before retiring to bed. In the morning prayers when Shema is recited, the Tzitzit are gathered in one’s hand before beginning the recitation. The commandment to wear Tzitzit is mentioned in the Shema and many have the practice of kissing the Tzitzit whenever the word Tzitzit is mentioned.

There is also a practice of kissing the Tzitzit during the procession of the Torah through the Synagogue. This procession takes place when the Torah is removed from the ark and is being taken to the raised platform where it will be read from. Those who are able to reach the Torah will touch it with their Tzitzit before kissing them.

When one is called up to the platform to read from the Torah scroll, one uses the corner of his Tallit to point to the first word that will be read and subsequently kisses the Tzitzit.

The kissing of the Tzitzit is an expression of love for the commandments of G-d.

What do the foods on the Seder Plate symbolize?