A dreidel is a four-sided spinning top that is played with on the Jewish festival of Chanukah. Each of the four sides bears a Hebrew letter; Nun, Gimmel, Hey and Shin that make up the acronym “Nes Gadol Hayah Sham” meaning “A great miracle happened there.” The letters also form a mnemonic for the rules of the game. Each letter stands for a Yiddish word that tells the player what to do. Nun stands for “nisht” meaning “nothing”, Hay for “halb” meaning “half”, Gimmel for “gants” meaning “all” and Shin for “shtel arayn” meaning “put in”. 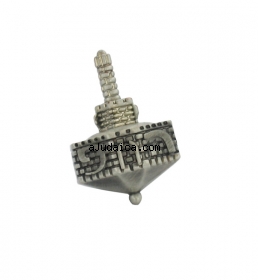 There are many different types of dreidels that can be purchased nowadays, both online and in local Judaica stores. Plastic, nickel, wood and pewter are just some of the materials that dreidels are made of nowadays.

A lovely Chanukah activity to do with children, when relaxing in front of the Chanukah lights is to make your own Dreidel:

Steps to making the Dreidel:

When the dreidel comes to a stop, the player who spun does whatever the letter displayed means:

Candles, Spirituality and You

Rav Kook on the Shofar