Kiddush: to sit or to stand? 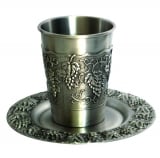 זכור את יום השבת לקדשו- to remember the Shabbat day in order to sanctify it. The Rabbis fixed the ceremony of Kiddush; recitation of a blessing over a cup of wine on Friday evening and in the day on Saturday in order to sanctify the Shabbat day as a way of mentioning it and thereby fulfilling this positive commandment. There are a variety of customs regarding whether one should sit or stand while reciting Kiddush that have developed over time.

Tosafot is of the opinion that in order to include those present in one’s recitation of Kiddush, everyone must sit, as a way of showing that they are joining together to fulfill the commandment together.
The Gemara in Pesachim quotes Shmuel who states that one should recite Kiddush where one intends to eat the meal that follows. The Mishnah Berurah follows this up by saying that one should say Kiddush in the same exact place one will be eating in. it follows therefore, that Kiddush should be recited while sitting as the following meal will also be eaten sitting there.
During the time of the Gemara and Rishonim it seems that there was one custom regarding sitting/standing during Kiddush as this issue isn’t discussed in the Gemara or Rishonim. Based on the discussion in Rambam’s Hilchot Succah relating to how to recite Kiddush on Succot due to the recitation of the blessing of “sitting in the Succah”, it seems that Kiddush was recited whilst sitting.

The Gemara in Bava Kama refers to the Shabbat as a Kallah and as a result many Kabbalists would stand during Kiddush to honor the Kallah; Shabbat.
The Mishnah Berurah explains that Kiddush is a testimony to the fact that G-d Created the world. Just as one testifying in a Jewish court must stand, we stand while testifying that G-d created the world.

There are customs whereby people stand for part of Kiddush and sit for the rest, stand at night and sit in the day and more. For a more in-depth explanation of different customs, see http://www.bknw.org/library/articles/shabbos/Sitting%20or%20Standing%20for%20Kiddush.pdf- the source of this essay.
As a general rule Chassidic communities go by the Arizal and other Kabbalist’s custom of standing for Kiddush. Later rulers of Jewish Law pointed out that standing on the eve of festivals or on Shabbat day has no basis because the section of Kiddush referring to testifying to G-d creating the world is not recited so it is preferable to sit on such occasions.

WHAT’S YOUR MENORAH FOR THIS UPCOMING CHANNUKAH?